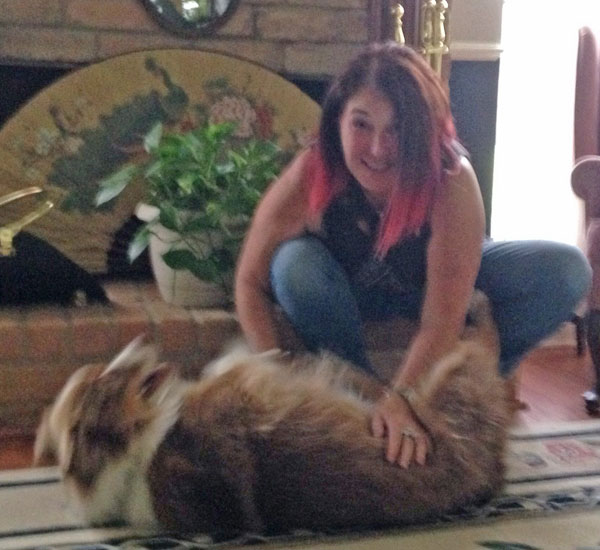 Daisy was given to STAR because she was chasing and harassing small animals. Now she will live in an urban setting with Denise and her family of dogs including a younger Aussie male. Many thanks to Lucinda for fostering Daisy.

Available Dog Daisy III, STAR # 1166
Daisy is a 4.5-year-old Aussie female who weighs just under 50 lbs. She is UTD on all of her vaccinations, spayed and heartworm negative. Daisy is house and crate trained as well.

This is Daisy’s third attempt at home. She was purchased from a TX Aussie breeder by people in their 60’s who found it difficult to meet the demands of her increasing need for activity as she grew. She stayed with her original owners for about two years, and then their daughter took Daisy for the next nearly two years. Daisy lived in an outdoor pen with another dog as the area was unfenced. There she found rabbits to be very tasty, chased the 4-H lambs and generally caused difficulty in a semi-rural setting on several acres. Because Daisy was left in a pen, she is very sun-bleached and it will take nearly a year for her dark red coat to return to its original status. Daisy, like most Aussies, will need regular grooming as she carries a heavy coat.

During her years of growing, Daisy has had her own choices to make. She is not used to being manipulated to have ears cleaned, feet trimmed or toenails clipped, and forget trying to look at her teeth! These are learned skills that Daisy will be acquiring while in rescue.

If one is not familiar with the “hard” playing style of Aussies which includes body slamming, nipping at other dog’s heels or body and generally rowdy behavior, then Daisy is not the dog for your dog! Daisy is also learning not to put her paws on the counters or kitchen table and a few other “fine tuning” behaviors which have not been learned by Daisy through the years.

On the upside, Daisy is very sweet, loving and wiggly and is trustworthy in the home. She loves your to bed and will roll around on it and it is the first place she heads when let out of the crate. Daisy is good with older children and will chase cats, so unless it is a very dog savvy cat who can stay out of Daisy’s radar, a home without cats would be best. Daisy will not be the dog that greets new people with an over-whelming hug or wiggle. She is very reserved, really shy with new people, and it takes her a few days to become comfortable in a new environment. Love, patience, and kindness will be the way to handle Daisy initially with a home that can tell her NO! and redirect her behaviors as needed. If that is your home, then this beautiful girl may be for you!

New Dog Daisy III, STAR # 1166
Almost five, Daisy is another Aussie that was sent to us for harassing livestock. She is a beautiful girl and we will find her a new home without livestock. She will probably go to an existing application. She will also have to be vetted and evaluated. Foster home is in N. Houston.