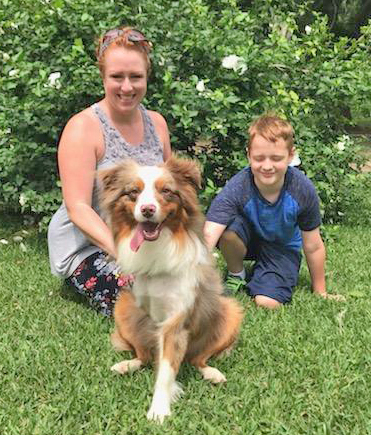 So Louie was returned because his new brother did not like him and visa versa. Now we have adopted him to a family with no other dogs and a child with special needs. Louie will be a great support dog for C.J. and be his new best friend. The O’Reilly family consists also of two older girls and three cats. Thanks to Lucinda for the home visit and to Lynn and Don for transport and to John and Pam for fostering.

Our tripod, Louie was adopted today and will be moving to Austin. He will live with past adopters, Mitch and Shelley and STAR dog, Ranger, Class of 2018. This is the third STAR dog for the family and we know he will get lots of training and love. There were lots of great applications for Louie but Ranger is from the same foster home and we couldn’t say no.
Thanks to Lynn and Don for transport and to John and Pam for taking such good care of Louie and letting him go. What a precious little dog !!!!

You might think that Louie is Special Needs but he’s not. Read what his foster dad has to say about Louie.

“Meet Louie he is a 2 year old 32 lb. red merle. He was injured as a puppy, his owners never cared for him and left him in a backyard for over a year. After coming to STAR he has been fully vetted. Unfortunately his right front leg was too badly damaged and left too long to be fixed. The leg had to be removed. That is in the past now.

It’s been over three weeks since his amputation and he has adjusted easily. He is the perfect house guest, has great house manners and is crate trained. He gets along with the other dogs and cats. One teeny observation is he needs to be properly introduced to new dogs “little big man complex“. After that he is fine.

He loves his humans and is always near by bathroom buddy, kitchen helper, snuggle bug and best friend. He loves to run and play balls and toys are a must as well as a playmate. He’s just a super happy boy.

If you think have a place in your life for Louie, just fill out our online adoption application. His foster home is in Sweeny TX and his foster dad will need a special home for this guy.

UPDATE. Louie has a meet and greet scheduled for May 5.

Two year old red merle male weighs approx. 45 lbs. Louie has something going on with his front leg and will have it checked out.. Otherwise he is neutered, current on vaccinations and chipped.. He will be evaluated and fostered in Sweeny..but we don’t know when he will be available..

UPDATE.. Louie will need to have his front leg amputated.. After being left for a year, it is not fixable.. Luckily, he is a wonderful little dog and will make a great companion..

Congratulations to Joleen and the Minarik family of the Woodlands.. She is possibly their 4th STAR dog most recently adopting Paddington, Class of 2019.. He and Joleen will be gre...

Puppy mill momma dog, Reba will have great new forever home with past adopters, the Curtis family and Wally... Thanks to everyone who helped us with Reba and especially her foster ...

Dolly could not be going to a better home.. Lance and Sharon recently lost 2010 STAR dog, Starlight and are thrilled to have a new girl.. Thanks to Ericka who contacted STAR about ...

Our adorable Aussie mom, Gracie has been adopted.. A long road including puppies and heartworm treatment.. She will be living in Rockdale with the Pelzel family.. Her life will inc...

Andy has been adopted by past adopter and long time volunteer for STAR, Judi.. He will live in Houston with his new Aussie brother, Murphy.. Thanks to Mack and Jane for the transpo...

Four year old red tri Dixon came to STAR from Louisiana with eye problems and heartworms.. All of that is behind him and he is the perfect starter dog for the Williams fa...

Krewe has moved from Baton Rouge to Sugar Land to live with the LeDoux family.. He will have an Heeler brother, Hebert.. Many thanks to Terry and Pilots n Paws for bringing Krewe t...

Harrison and Jessica drove from Austin with their Aussie, Wes to meet and adopt Arya (L).. Things are going to liven up around their place.. Thanks to Kerri for picking up Arya, to...