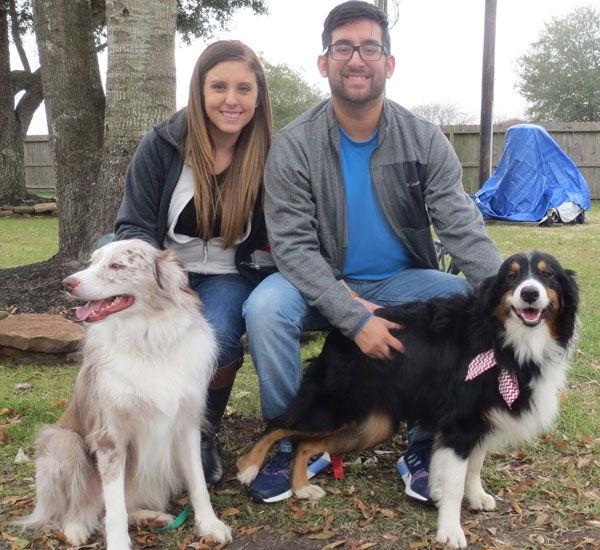 Eighteen-month-old Sam came to STAR from Mississippi with his sister, Sophie. It was important that Sam have a companion. Now he has been adopted by the Galvan family and will have an Aussie brother, Broome/aka Dexter, Class of 2016. They will live in Dickinson. Many thanks to Elaine and Julie for bringing us these dogs and especially to Julie for fostering and evaluating Sam.

Available Dog Sam, STAR # 1375
Sam is neutered, completely vetted, micro-chipped, and ready to take on his new life. He loves a quiet environment but does well if the volume goes up around him. He’ll stay by your​ side when you’re working, watching TV or talking with friends as long as he is on leash.. otherwise he’ll wander and find something to do or chew. If you want him in a crate throw a treat in first Sleep through the night, yep. Come when called or whistled at you bet. This playful 18 mo. old 42 lb. pup has a pleasing personality and is known as the Ranch Playboy. He gets along with other dogs (especially the girls,) meets newcomers without hesitation and loves to play with his partners in crime. ( a little rough at times) So a sharp QUIT or HEY stops any behavior if he gets carried away.
​
He still has a habit that will need work, he jumps on people when he meets them (turn your back on him and/or walk away) Sam has learned to “walk on” past dogs behind fences, but he will bark at anyone near ‘his’ fence. Sam is checking every day to see if the right person is out there looking for him, so fill out an application and come say “Howdy”, and he says ​bring your girl Clearly Sam would like a sturdy female companion. Sam’s foster home is in Cypress, TX.

New Dog Sam, STAR # 1375
Sam is one of two dogs whose owner passed away in Mississippi. He and Sophie have been transported to STAR. Black tri male approximately 42 lbs. and 18 mos. old. Has been vetted and will be evaluated and fostered in Cypress. He should be available at the end of January.