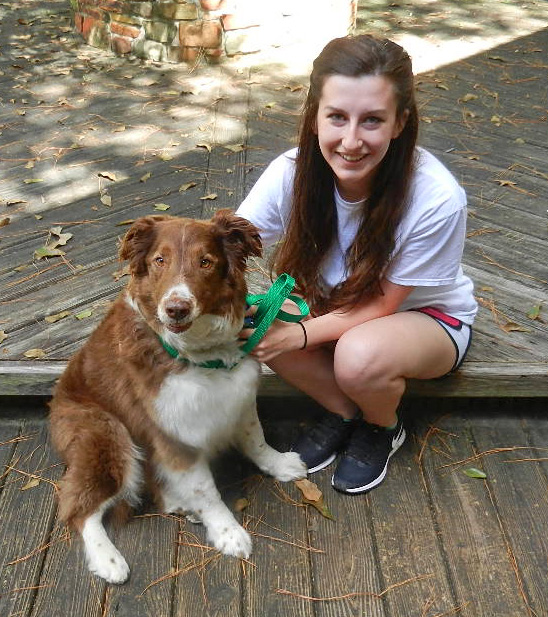 Dumped at the Georgetown shelter by his previous adopters, River deserves only the best.. and now he has Maddie. He will be her companion.. he will go everywhere with her and sleep in her bed. Huge thanks to Topher who brought River back to life. He is a far cry from the obese shaved depressed dog we picked up. Happy Life, River!

Available Dog Valentine/aka River, STAR # 1248
The river is our STAR dog that was found dumped by the people we adopted him to at the Georgetown shelter. He had been shaved and was 20 lbs. overweight.. and was extremely depressed.. It’s been six weeks.. and he is finally happy and a dog again. His fur is growing back and it’s curly. He has gone hiking in Colorado…. and loves the dog park..and his foster sister. Also, he has lost just over 20 lbs. The river is on thyroid meds for the rest of his life. Twenty dollars for a two month supply. The river is ready to be adopted to the right home. If you are interested in meeting this sweet laid back boy, please go to the website and fill out an application. His foster home is in downtown Houston.

Bio from his foster dad

The river is looking for his best friend. The only “good humans” he has known, have been in his STAR foster homes. The river is ready for someone who wants and needs him as much as he wants them. Having already been adopted to a negligent family, River came back to STAR dispirited, overweight and very sad. He looked like he had lost his will to live.

With time, love, diet, exercise and lots of adventures, River has regained his eagerness for life and all the fun it offers. The river is more mellow than most Aussies, at 6 years old he likes his afternoon naps, but he’s definitely not a lazy boy. River loves, loves, loves to go on walks, to run (he’s up to 1 mile), go hiking, ride on boats, ride in the back of the car and go anywhere and everywhere with his human. River craves being constantly by your side, not only when you’re home, but to take a trip in the car to Starbucks or to visit the pet store for bones and antler treats. Anytime you ask him if he wants to “do” something or get his leash, his entire back half of his body wiggles and wags emphatically with joy.

He walks perfectly on a leash and prefers 2 or 3 full leisurely 30 minutes (or more) walks per day to get his exercise and sniffs of the neighborhood, in addition to a quick squirrel-check and potty break in the yard now and then. He loves to run around a backyard and investigate trees that may be hiding squirrels to chase, but really also needs to spend time with his person engaging on walks, and doing things together – not just on his own in a back yard.

The river is smart, loyal, protective, silly, funny, loving, cuddly – all the wonderful qualities in an Aussie. He is house-trained, crate-trained and rides perfectly in a car. He’s been on two road trips to Colorado since he’s been in foster and loves having an active outdoor lifestyle (he hiked over 200 miles in 5 weeks this summer). River likes to play hard then mellow out and rest hard as well. After a good day with his person, he loves to sleep on the couch next to you, or by your feet.

He gets along great with both dogs and humans alike. With male dogs in his home, he needs a little time to sort out who’s boss, but he’s very adaptable. He loves to wrestle if another dog initiates play with him and would be best in a home with another dog to include in his family.

He’s affectionate to everyone he meets and social in any/every setting he’s introduced to. The river does not do well with cats, in fact, he loves to chase cats, squirrels, bunnies and even an elk once. He prefers to chew bones instead of play fetch or with toys but sometimes gets silly with a toy if there is a lot of excitement going on around him and he wants to join in on the fun.

The river is down to a slim 62lbs, with golden lion eyes, floppy ears (one is higher than the other), soft red and white hair. He’s got a few scars and missing a couple of teeth from his last unfortunate home, but he’s got a smile as wide as the state of Texas that lights up the room.

The river may not have quite as high of an energy level as other Aussies, but his physical and mental needs require someone who wants to spend a lot of time with him. The river has had a life of being left alone and is now ready for a human best friend who wants to include him in their life and give him the enrichment, adventure and love this sweet boy deserves.