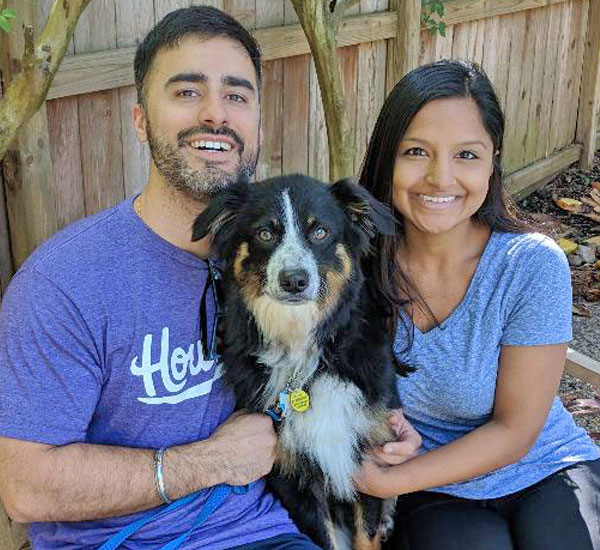 The Kharbanda family adopted Little Finn today and can hardly wait to get him home to play more with their Aussie, Blue. Many thanks to Terry and Zee for the home visit and for fostering Finn. Another job well is done..

“As far as I can tell Finn’s only real issue is he’s only an 11month old puppy, but a very well mannered one, given that starting point. Yes, he does like to play rough w/ Bella, but in the manner of play-fighting that all of my Aussies seem to do, he doesn’t do it in a mean way. He can be an only dog especially as he gets a little older & became settled in his new home & his owner’s schedule.

Crating UGH he goes in his crate on his own (he’s even learning to open the unlocked door on his own) to get fed, etc. He does bark for 15-20 mins. after we leave & of course is amped up when we return & let him out. He does not want to sleep in his crate, he wants to be part of the “pack” & not excluded, so because we want to sleep ourselves, he sleeps in my room or the bathroom (he likes the cool tile floor). He (I?) has learned how to let you know he wants to go outside & also back in. He walks fine w/ the “easy walk” halter, he only pulls if he wants to catch up w/ Bella to see what’s she may be sniffing. He would be perfect for older kids more inclined to throw the ball/frisbee/squeaky toy & play w/ him, as he retrieves things & does bring them back to you to throw again and/or play tug-o-war.

The couple of times we’ve encountered cats he didn’t pay any attention to them, but as w/ Bella if the cat starts running it would probably be game on, although I cannot be certain. He likes all the chew toys etc., but likes to get in the bathroom trash cans, will drink from the toilet if the lid is not down, likes to steal shoe/socks if left out, but doesn’t really destroy them. His worst habit is counter surfing, especially if you leave the room for a moment, as he is very sneaky about knowing when to do it; when you are not in the room. So far he’s gotten two bananas & a peanut butter & jelly sandwich(not a whole turkey like Rayne). Loads up in the car & travels well, as he Bella & I took a day trip to Austin & back to move our grandson. Having to live in a small, one bedroom apartment environment would not be ideal for him, but a condo/townhome situation could work just fine” .

So here we have Finn.. basically a one-year-old puppy that will need a lot of training and a dedicated person. He is a sweet boy with good house manners and although he will need to be created when unsupervised, he does not like it.. If you would like to meet Finn. please read about adoption on our STAR website and submit an application.. or contact STAR if you already have one and think you could be a match

New Dog Little Finn, STAR # 1386
Finn is a ten-month-old enthusiastic black tri male puppy under 50 lbs. He will be vetted, evaluated and fostered in the Houston Heights. Finn should be available for adoption in the middle of March.