Australian Shepherds, along with several other mostly collie-type breeds, can carry a genetic mutation that makes them sensitive to certain drugs.  Use of those drugs can cause serious neurological illness or death.

Fortunately, there is a DNA test that will let you know whether your dog has this mutation.  All you have to do is provide a cheek swab.  It isn’t even necessary to go to the vet. 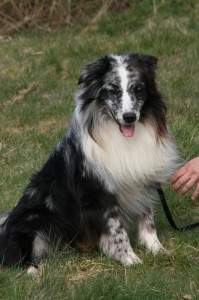 How accurate is the test?

Extremely.  It will identify the genotype of the dog tested:  Exactly which form(s) of the MDR1 gene the dog has.

MDR1 is the abbreviated name of a gene called Multi-Drug Resistance 1.  A mutation of this gene causes sensitivity to Ivermectin and a number of other drugs.  Dogs with the mutation will react to those drugs.   Whether a dog reacts depends on the dosage of the drug.  A dog may not react to very low doses, as with the amount of Ivermectin found in heart worm products.  Typical doses of a variety of medications will cause reactions in dogs with two copies of the mutation, but some drugs – most notably several chemotherapy agents – can cause reactions in dogs with only one.  Dogs with this mutation have a transport defect—the drug goes in to their brains, fails to be transported out, and builds up to toxic levels.  This causes serious neurological problems including seizures and sometimes death.

Which drugs cause MDR1 reactions?

Ivermectin was the first drug recognized to cause a reaction, but it is far from the only one.  Ivermectin at low dosage, as found in heartworm medications, will not cause a reaction.  The larger doses needed for worming will.  Other commonly administered drugs on the list include acepromazine and Imodium.  Fortunately, there are alternative medications available if your dog requires treatment.

The drugs involved can be found on the VCPL website.

This site offers a “medic alert” type collar tag for MDR1 dogs and has more extensive list, including alternate and generic names for the drugs:

Dogs that do not carry an MDR1 mutation may safely receive the listed drugs.

Which breeds are affected?

How common is the MDR1 mutation in Aussies?

One in two Aussies has at least one copy of the gene.

How do I know if my dog has the MDR1 mutation?

If your dog has already reacted to one of the listed drugs, it has the mutation.  However, reactions can be so dangerous to your dog it is advisable to have the dog tested so you know whether it is sensitive before it receives any of these drugs.

What do the MDR1 test results mean?

This is a DNA mutation test.  It will determine whether or not a dog has the MDR1 mutation and, if it does, whether it has one copy or two.  The test report will provide you with the genotype for your dog, generally listed as Normal/Normal, Normal/Mutant or Mutant/Mutant.  Dogs with even one copy of the mutation should be considered sensitive to listed drugs.

Do I need to tell my vet about my dog’s MDR1 test results?

What does being an MDR1 carrier mean?

Some testing labs refer to having one copy of MDR1 or other genes as having “carrier” status.   This is only accurate if the gene mutation in question is recessive.  That is not the case with MDR1, which is incompletely dominant.  Dogs with one copy are affected, though to a lesser degree.  They will react to every drug on the list if the dosage is high enough.

What dogs should be tested and how often?

Since this is a DNA test, a dog only needs to be tested once.  Due to the high frequency of the mutation in the breed and the variety of drugs to which dogs with the mutation can react, all Aussies, including rescues of unknown parentage and Aussie-mixes should be tested.  Their lives could depend on it.

The only exception is as follows:  If both parents of a dog have tested Normal/Normal, they cannot pass on the gene and their offspring will not need to be tested.  However, if a Normal/Normal dog is bred to one of unknown status or one that has even a single copy of the mutation, the offspring must be tested.

How do I get the test done?

For those in North America, The test is available through Washington State University.  Information can be found on their website.

In Europe the test is available for those in Austria, France, Germany, Netherlands and the United Kingdom through Genetic Counseling Services in the Netherlands:  All other European countries may submit samples either to VCPL in the US or GCS in the Netherlands.  In Australia,Gribbles Veterinary offers the test.

What does having MDR1 dogs mean to my breeding program?

You may breed dogs carrying the MDR1 mutation, even if they have two copies. MDR1 dogs react to certain drugs.  Before these drugs were introduced into veterinary practice, no one was aware this mutation existed, even though it has been around for at least a century and a half.  The MDR1 listed drugs, while valuable for veterinary care, are not a part of nature and can readily be avoided when you know a dog’s MDR1 status.

Test your breeding stock as per the recommendations above. [hyperlink to What dogs should be tested…]  You might want to consider testing all puppies that have at least one parent with the mutation before they leave for their new homes.  At the very least, provide your puppy buyers with copies of the parents’ reports and urge those whose puppies may have inherited the mutation to get their dogs tested.  Puppy buyers should be instructed to provide copies of the parents’ reports to their veterinarians so that their puppy will be treated appropriately as regards the listed drugs.  If the puppy has been purchased for breeding, make the new owner aware that MDR1 testing should be considered as necessary as hip and eye exams and should be done before the dog is bred.

As time goes on and more dogs are screened, you could determine the need for screening any particular dog by checking the pedigree for known test results.  If you find Normal/Normal ancestors along every line of descent, there’s no need to test.  But if even one is unknown or has a dog with at least one copy of the mutation, you should test your dog.

The MDR1 is an optional Canine Health Information Center (CHIC) requirement for Aussies.  Check OFA’s website for information on how to submit your test results.  Dogs out of two Normal/Normal tested parents that have been registered with OFA  can receive a certificate with a CBP (cleared by parentage) notation without having actually been tested themselves.

Since MDR1 can cause seizures and even death, wouldn’t it be better not to breed MDR1 dogs at all?

ASHGI DOES NOT recommend removing dogs from the breeding pool solely because they carry one or even two copies of the MDR1 mutation.  This mutation is only a problem because we administer drugs to dogs to which they can react.  If dogs were wild animals, they wouldn’t receive drugs so this would be no issue at all.  The point is to know your dogs’ status and avoid giving the problematic drugs if they have the mutation.

Half of the breed carries at least one copy of this mutation.  Eliminating all these dogs would cause a severe restriction in our breed population which could result in making serious health issues for which we have no tests more common.  Breeders should follow the steps outlined in the question above this one.  Over time—and multiple generations—the frequency of the MDR1 mutation can be reduced without damage to the gene pool.

Does the MDR1 mutation cause epilepsy?

MDR1 drug reactions are not a form of epilepsy, nor are they in any way related to epilepsy. The MDR1 mutation is one of the many things that can cause non-epileptic seizures.  The drug reaction is very different from primary epilepsy.  The dog will only seize when the chemicals build up in its brain.  Treatment is different, prognosis is different and the seizures themselves may be different in presentation.  MDR1-related seizures only occur if a susceptible dog is given one of the listed drugs.  Once the drugs finally clear from the dog’s system, the seizing will stop.  If the dog does not receive those drugs, it will not have seizures due to the MDR1 gene.

Since the frequency of the MDR1 mutation is so high in Aussies and epilepsy is also a common disease it is possible that an epileptic dog could also have the MDR1 mutation.  Such a dog would have two diseases, not one.  It may be possible that if an epileptic dog suffered an MDR1-induced seizure, the episode might trigger subsequent epileptic seizures.  MDR1 seizures will always closely follow administration of one of the listed drugs.  Seizures in epileptic dogs will have no relationship to whether the dog did or did not have those drugs, unless the dog is both epileptic and MDR1.

Can eating feces cause an MDR1 reaction?

If a dogs with the MDR1 mutation eats feces from horses or livestock that have recently been dosed with Ivermectin or related worming products the dog may suffer a reaction.  These reactions can be lethal.  It isn’t clear how long Ivermectin and related medications will persist after excretion. However, reported reactions were linked to feces from horses and sheep that had been treated within a couple days prior to the incident.

If your dog has even one copy of the MDR1 mutation, keep it away from horses and livestock that have recently been wormed.  If you don’t know your dog’s MDR1 status, you should get the dog tested.

If my dog has MDR1 is it safe to get its teeth cleaned?

Yes, provided you make your veterinarian aware of the dogs MDR1 status so the dog will receive anesthesia or tranquilizers that will not cause a reaction.