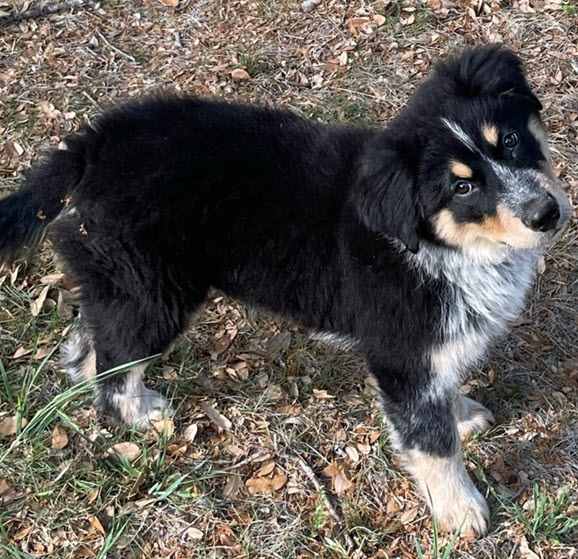 Storm Trooper (Stormy) is a rough -n- tumble puppy.  Curious and mischievous.  He’ll chew on anything left in his reach and potty training is coming along well – still in the puppy stage!  Smart and learns quickly.

Eats like a champ and sometimes puts both feet in the water bowl when he drinks.  Sleeps in a large crate quietly at night and will kennel into the crate during the day with a treat.  Not happy in the crate as he wants to be on the move!  Loves other dogs and favorite way to spend his day is to chase and wrestle with them.   Pulled from MCAS as a stray.  Cutie who provides non-stop entertainment!

Ten-twelve weeks old and 12 lbs. … male black tri puppy found at MCAS.. He will be vetted, evaluated and fostered in League City.. He will need puppy shots before he can be adopted.. Most likely around the middle of May..

About Winchester….  Found running loose in Spring, TX.  Sweet, skinny boy who could use a few pounds.  He looked great after a bath and groom!  He is a happy dog who loves to...

My foster dad says, "I'm a very well behaved and loving girl."  Though still somewhat a puppy, her body is starting to fill out to adult build.  Always first one to sit.  Easy t...

Callie Sue is a very sweet loving dog. She will jump up in your lap to get some loving.  Right now, she is all puppy. If you are petting another dog, she will try to push her way ...

Hi World! My name is Holly, and I am a true Southern Belle.  I was. surrendered to a shelter in Mississippi since my family was very allergic. Some very nice people came to ge...

From his foster  mom: "Ryder is a five year old blue merle male with beautiful blue eyes. He is very laid back and enjoys being loved on. He isn’t much on toys but loves his ...

Read their story All Available Dogs